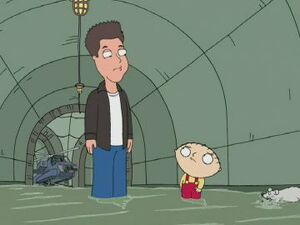 Corey Ian Haim (December 23, 1971 – March 10, 2010) was a Canadian actor, known for a 1980s Hollywood career including films such as License to Drive, Dream a Little Dream and alongside Corey Feldman in The Lost Boys.

He appeared with Feldman in "You've Got a Lot to See" from "Brian Wallows and Peter's Swallows" when Brian hypothesizes they could be running mates if they ran for President and Vice President in 2004.

The Griffins run into Haim in the sewers under Asiantown in "Breaking Out is Hard to Do".

The song, "Mr. Booze", in "Friends of Peter G" asks who is to blame for Haim's downfall.

Brian uses the troubled lives of former child actors to convince Stewie to give up acting in "The Peanut Butter Kid", including Corey who died an early death.

Retrieved from "https://familyguy.fandom.com/wiki/Corey_Haim?oldid=210379"
Community content is available under CC-BY-SA unless otherwise noted.