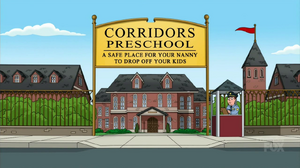 Corridors is an exclusive preschool that Lois enrolls Stewie in after she finds that his current day care is serving the children dog milk and has other issues as well in "Take a Letter".

There, he is pleased to find that his classmates are well-heeled rich children. He makes friends with Chadley and is invited to a pay date at his mansion, but when he is put on the spot to reciprocate, he has to "borrow" a mansion from a television pitchman who is on vacation with his family. After suitable impressing Chadley, he suggests throwing a party for the entire class. It goes splendidly, until the home's owner shows up and they are all forced to leave. Stewie tries to apologize for being poor but is told by Chadley that he is being ostracized, not because he is poor, but for lying and being poor.

Retrieved from "https://familyguy.fandom.com/wiki/Corridors?oldid=186338"
Community content is available under CC-BY-SA unless otherwise noted.