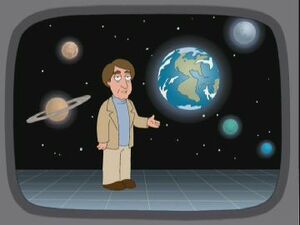 Cosmos: A Personal Voyage is a thirteen-part television series written by Carl Sagan, Ann Druyan, and Steven Soter, with Sagan as presenter. It was executive-produced by Adrian Malone, produced by David Kennard, Geoffrey Haines-Stiles and Gregory Andorfer, and directed by the producers and David Oyster, Richard Wells, Tom Weidlinger, and others. It covered a wide range of scientific subjects including the origin of life and a perspective of humanity's place in the universe.

In "Airport '07", Peter Griffin, now acting like a redneck watches an episode of the series edited for rednecks. All statements that conflict with the creationist view of the world are edited out and replaced. Sagan states that our planet is four—hundreds and hundreds of years old, that scientists determine the universe was created by the God-ig Bang, and that if one looks at the bones of a Jesusnasaurus Rex, it’s clear by the use of carbon-dating that Mountain Dew is the best soda ever made.

Retrieved from "https://familyguy.fandom.com/wiki/Cosmos:_A_Personal_Voyage?oldid=160971"
Community content is available under CC-BY-SA unless otherwise noted.