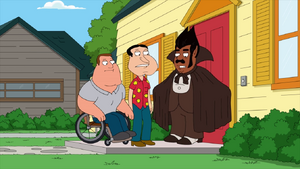 Count Chocula is a fictional character that appears as one of the General Mills monster-themed breakfast cereal mascots. The series also includes the currently produced Frankenberry, and Boo Berry, and the limited production Fruit Brute and Fruity Yummy Mummy.

In "Wasted Talent", Cap’n Crunch requests a hit on Count Chocula in retaliation for claims made that Cap’n Crunch cuts the roof of people’s mouths. [1]

Frankenberry complains about the Count in The Bachelorette in "Brian the Bachelor", noting that he would be only of interest to Brooke Roberts as a minority.

Cleveland Brown dresses as Count Chocula in "Dog Bites Bear" to trick Peter into washing his hand after he meets Boo Berry at the Stop 'N Shop and shakes his hand, vowing never to wash it and becoming disgusting.

Retrieved from "https://familyguy.fandom.com/wiki/Count_Chocula?oldid=226369"
Community content is available under CC-BY-SA unless otherwise noted.