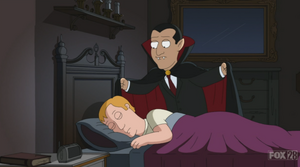 Count Dracula is a fictional character and the titular antagonist of Bram Stoker's 1897 Gothic horror novel Dracula. He is described as an archetypal vampire and some aspects of his character have been inspired by the 15th century Romanian general and Wallachian Prince Vlad III the Impaler. The character appears frequently in all manner of popular culture, from films to animated media to breakfast cereals.

In "Livin' on a Prayer", the Griffins watch a television movie titled Dracula in San Francisco. As Dracula is about to bite his victim, he stops for a blood test. When he gets the results back by way of a bat, he decides to abandon his potential victim.

Retrieved from "https://familyguy.fandom.com/wiki/Count_Dracula?oldid=151944"
Community content is available under CC-BY-SA unless otherwise noted.