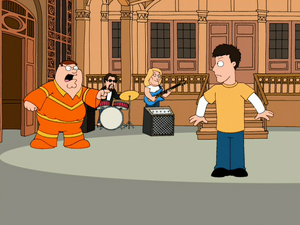 Counting Crows is an American rock band originating from Berkeley, California, formed in 1991. The group gained popularity in 1994 following the release of its debut album in 1993, August and Everything After, which featured the hit single "Mr. Jones".

They appeared on "Don't Make Me Over" as musical guests on Saturday Night Live. Peter Griffin thanked them in the goodbyes segment at the end of the episode.

Retrieved from "https://familyguy.fandom.com/wiki/Counting_Crows?oldid=148336"
Community content is available under CC-BY-SA unless otherwise noted.