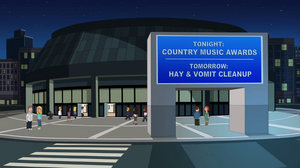 The Academy of Country Music Awards were first held in 1966, honoring the industry's accomplishments during the previous year. It was the first country music awards program held by a major organization. The Academy's signature "hat" trophy was created in 1968.

The guys travel to the Country Music Awards in Nashville to see Carrie Underwood in "3 Acts of God" when they believe she has a connection to God, also meeting Taylor Swift while there. However, Carrie's answers fail to satisfy their need and they leave as her boyfriend Jesus demands $40 to buy a Toby Keith hat.

Retrieved from "https://familyguy.fandom.com/wiki/Country_Music_Awards?oldid=214424"
Community content is available under CC-BY-SA unless otherwise noted.