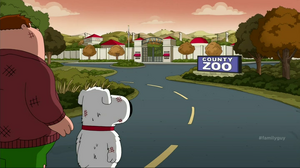 The County Zoo is where Peter and Brian locate a turkey on Thanksgiving Day after eating the one planned for dinner in "Turkey Guys".

After locating a replacement bird sixty miles from home at the Highland Park Market, Peter wrecks Brian's car and his ensuing antics result in their turkey being stolen by another desperate man. Passing the County Zoo, Peter gets the idea to steal a turkey despite Brian's reservations. Jumping the gate, they find a turkey but have to chase it through the zoo, resulting in Peter getting his face ripped off at the chimpanzee enclosure. The turkey hops onto the aerial tram, but when Brian tries to jump on to keep up, he falls into the lion pen but is rescued by Peter with a flamingo, although the result kills the flamingo. He is grateful as Peter apologizes for his actions. Peter considers substituting the flamingo for a turkey, but Brian convinces him to get the real one. Securing the turkey, they steal the zoo's tram train and head for home.

Retrieved from "https://familyguy.fandom.com/wiki/County_Zoo?oldid=171294"
Community content is available under CC-BY-SA unless otherwise noted.