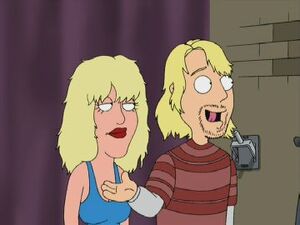 If Cobain hadn't done drugs, Love would not have gained her celebrity status, as seen in "Dammit Janet!". Cobain talks to arena employees and introduces Love as his wife to them, and they have never heard of her.

While trying to infiltrate a terrorist sleeper cell in "Turban Cowboy", Peter assures Joe that he can blend in like a chameleon into Courtney Love's crotch.

Retrieved from "https://familyguy.fandom.com/wiki/Courtney_Love?oldid=141108"
Community content is available under CC-BY-SA unless otherwise noted.