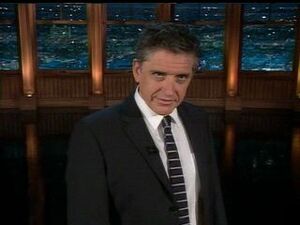 Craig Ferguson (born 17 May 1962) is a Scottish-American television host, stand-up comedian, writer, producer, director and actor. He is the host of The Late Late Show with Craig Ferguson, an Emmy Award-nominated, Peabody Award-winning late-night talk show that airs on CBS.

He appears as himself on the set of his talk show in live-action doing a snappy monologue about Lauren Conrad's relationship with Brian Griffin in "We Love You, Conrad".

Retrieved from "https://familyguy.fandom.com/wiki/Craig_Ferguson?oldid=126150"
Community content is available under CC-BY-SA unless otherwise noted.