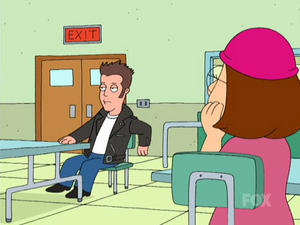 Craig Hoffman is a student at James Woods Regional High School, where he is one of the cool kids. In "Don't Make Me Over", Meg Griffin has a crush on him, but she is not attractive enough to date him, and mistook her for a guy on one occasion. Once Meg had her makeover, however, he asked her out since she became attractive. He doesn't play by anyone's rules but his own, and on occasion not even those. After agreeing to go on a date with Meg, he told her he'll pick her up when he was ready. A few minutes later, while still in school, he was ready to go on the date.

Craig is mentioned in "Petarded", when Meg and her friends talk about his new car at a slumber party. Meg comments that the car is blue-green, like his eyes.

He is named after the Family Guy writer and producer of the same name.

Retrieved from "https://familyguy.fandom.com/wiki/Craig_Hoffman?oldid=183290"
Community content is available under CC-BY-SA unless otherwise noted.