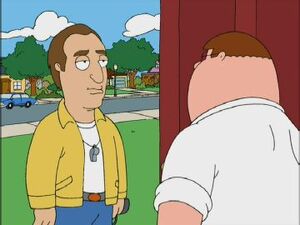 When Gumbel 2 Gumbel Beach Justice is canceled in "If I'm Dyin', I'm Lyin'", Peter Griffin, one of the show's biggest fans, writes a letter to NBC demanding for them to put it back on, or he will miss Nelson's skillful acting. However, when he accidentally spilled glue on the letter, it looked like he wrote that he will kill him. Nelson arrives at the door asking Griffin not only to kill him, but quickly.

While working as James Woods's agent in "Tom Tucker: The Man and His Dream", Peter and James receive a proposal for a script that Nelson, Jeff Goldblum and Jeremy Irons had already rejected.

Retrieved from "https://familyguy.fandom.com/wiki/Craig_T._Nelson?oldid=213244"
Community content is available under CC-BY-SA unless otherwise noted.