Start a Wiki
watch 01:50
The Loop (TV)
Do you like this video?
General
References
Notes/Trivia
Quotes
Goofs 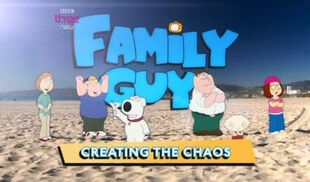 Featuring: Seth MacFarlane, Alex Borstein, Mila Kunis, Seth Green, Mike Henry
Plot: A behind-the-scenes special first broadcast on BBC Three. It was broadcast as part of "Family Guy Night", a celebration to prelude the UK premiere of Season 7. In this we see behind the scenes look at season 7 episodes coming to the UK. In this we see a viewing of table reads from season 7and a very short one from season 8 , interviewing all the workers making them say all upcoming episodes and questions to all the characters including Seth MacFarlene.

Retrieved from "https://familyguy.fandom.com/wiki/Creating_the_Chaos?oldid=40589"
Community content is available under CC-BY-SA unless otherwise noted.