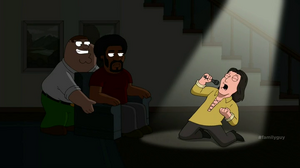 Creed was an American rock band, formed in 1993 in Tallahassee, Florida. The band consisted of lead vocalist Scott Stapp, guitarist and vocalist Mark Tremonti, bassist Brian Marshall, and drummer Scott Phillips. The band disbanded in 2004 due to increasing tension between members.

When explaining to Jerome why he should "Thank the Whites" in "Baby Got Black", Peter uses the music of Creed as an example.

Retrieved from "https://familyguy.fandom.com/wiki/Creed?oldid=162657"
Community content is available under CC-BY-SA unless otherwise noted.