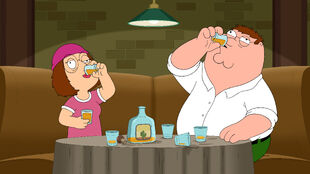 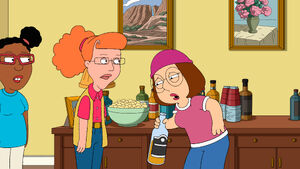 Peter encourages Meg to crash a high school party so he and Lois can have the television to themselves. When she strikes out trying to make conversation, she starts drinking from the bar and impresses the other kids with her bottle-tossing skills. She continues to drink at home and is caught by Lois, who instructs Peter to encourage her to stop after finding out that he put her is such a position to start with. Peter's attempt at discussion leads them to The Drunken Clam where they start drinking together, and awaken some time later adrift at sea having climbed aboard and cast off while drunk. Meg experiences her first hangover and Peter dispenses useful advice, leading her to swear off drinking. 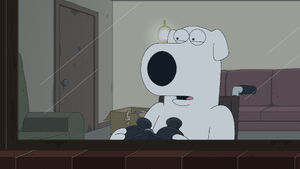 Meanwhile, incapacitated from his broken leg received in "Petey IV", Brian is left with little else to do but spy on the neighbors in the apartment building across the street. One of his observations is of a fight between Principal Shepherd and his wife, and he later sees him dragging a large garbage bag out that leaves a trail of red liquid behind and a report of her missing comes in later still. He tries to call in his concerns to Joe who can't help him without more solid evidence, as well as trying to sell him eye cream as a side business.

Stewie tries to help him by checking Shepherd's apartment when he steps away. Stewie is nearly caught once but disguises himself as one of Shepherd's dolls. After receiving some unwanted attention, Stewie tries to escape and is spotted, with Principal Shepherd spying back at Brian's apartment. He confronts Brian and Stewie who smacks him with a baseball bat which results in Brian being knocked out of a window. With the medic and police present, they find Shepherd's bag and find it is full of food taken from the school due to his wife's departure and has been safe during this time. With further injuries, Brian is welcomed back to the Griffin home due to being hailed a hero for saving the school board over $200 from food recovered from Principal Shepherd's refrigerator.

Retrieved from "https://familyguy.fandom.com/wiki/Crimes_and_Meg%27s_Demeanor?oldid=201004"
Community content is available under CC-BY-SA unless otherwise noted.