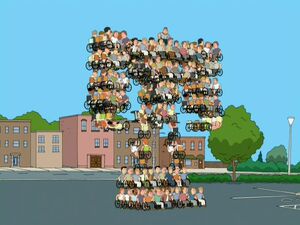 Crippletron is a giant robot-like formation that Joe Swanson and his peer cripples can take on, with Joe as the head, in "No Meals on Wheels". Taking down Joe takes down the Crippletron. It was created when the makers were disallowed from dining at Big Pete's House of Munch and using it as a hangout place. In response, they created it to destroy the restaurant. Because of its giant size it moves slow but its punches are enough to damage the roof of the House of Munch without causing any visible harm to the people it is made of.

It was destroyed by Stewie Griffin due to his small size and maneuverability. However, the destruction of the Crippletron forced the restaurant's owner, Peter Griffin into a wheelchair when it fell onto him and injured his leg.

Retrieved from "https://familyguy.fandom.com/wiki/Crippletron?oldid=174582"
Community content is available under CC-BY-SA unless otherwise noted.