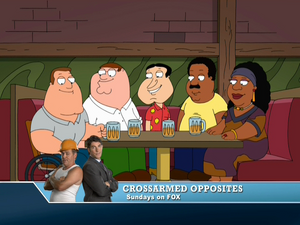 Cross-Armed Opposites is a fictional live-action television program whose promotional bumpers were shown during "Peter's Progress". It is a parody of the genre of sitcom that a show such as The Odd Couple produced. It stars Danny Smith and John Viener, two producers of Family Guy. It airs Sundays on FOX.

Retrieved from "https://familyguy.fandom.com/wiki/Cross-Armed_Opposites?oldid=92197"
Community content is available under CC-BY-SA unless otherwise noted.