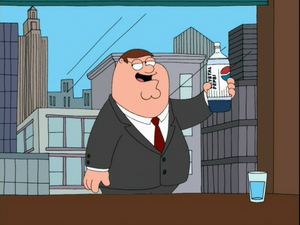 Crystal Pepsi was a caffeine-free soft drink made by PepsiCo from 1992 to 1993 in the United States, Canada, and for a short time in Australia. Crystal Pepsi was sold for a longer time in Europe. Initial sales were good but quickly fell. Pepsi pulled the drink off the market and returned several months later with a reformulated citrus drink titled "Crystal From Pepsi", but this was short-lived as well.

Peter Griffin claims that his idea for faking Quagmire's death in "I Take Thee Quagmire" is his best idea since he invented Crystal Pepsi. He is shown touting the benefits of being able to see a killer through the drink.

Retrieved from "https://familyguy.fandom.com/wiki/Crystal_Pepsi?oldid=128838"
Community content is available under CC-BY-SA unless otherwise noted.