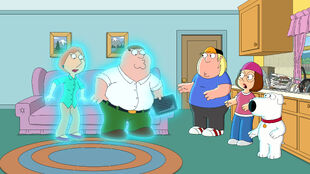 Cutawayland
Peter and Lois get trapped in a cutaway. 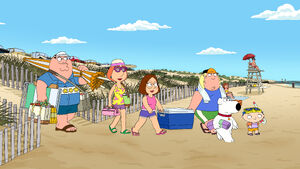 The Griffins spend a day at the beach, where Peter is frustrated in trying to have some private time with Lois, which continues upon their return home. In their frustration, they set up the same cutaway of an Australian buying a suit at the same time, and disappear in a blue flash of light. They find themselves actually inserted into the gag. As Lois tries to piece together what happened, she sets up another cutaway of an uptight guy at an Eagles concert and they are transported to the new gag. Lois surmises that it takes a simultaneous setup to get out, but only one to transport between gags. Looking at the bright side of things, they decide they can use the power to have their private time at last.

They send themselves to Tom Brady's locker room shower, but are turned off by his Donald Trump hat. In frustration, Peter send them to Charlton Heston's funeral where Peter takes a gun from his cold dead hands. Their good mood returned, Lois sends them to a spin class run by a giant pair of Swedish legs, although Peter transforms himself into a bicycle seat. However, this backfires when he is used by a middle-aged fat guy with dirty shorts. Back home, the kids try to file a report with Joe, who ignores it to have a Star Wars fantasy. Meg suggests they use their own alone time to throw a party, but Chris misconstrues her use of the word 'rager' as a euphemism for an erection. 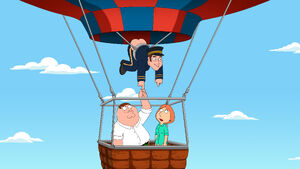 Peter and Lois try to take a flight to Paris, but find themselves in the Robert Loggia gag from "Peter's Two Dads". Bemoaning the fact that this gag goes on for a while, Peter gets the idea of bringing his iPad to them that Chris took when they first disappeared. They then set themselves up in a 'fart air balloon' but Peter quickly changes it to a 'pancake ER'. Back at the kid's house party, Principal Shepherd is their only guest while Meg hurts her back dancing on a table and is beamed up to an alien spaceship. Peter sends himself and Lois to an unlocked hospital medicine storage room where he hears "You Have AIDS" going on in the next room. By this time, Lois begins to miss the kids and is ready to go home, although Peter is resistant and sends them back to Tom Brady's locker. Lois' pleas finally reach him and they wish they were back with their family, but they end up joining them in the locker. While everyone is away, Principal Shepherd returns, and finding the house completely empty, uses it to throw his own successful Principal's party.

When they try to correct themselves, Peter and Lois discover they have lost the ability to leap out of the locker room. Peter tries to use the locker room phone to call Joe for help, but ends up getting the "Joe Is on a Vacation" voice mail gag from "Encyclopedia Griffin". However, Joe answers the phone when the song is over, and after verifying that he isn't simply another gag, he asks for help in getting out. After consulting an autistic fanboy's theory, Joe sends them to the very first cutaway gag to kill Adolf Hitler. When Lois points out that their power is not working, Joe starts to feed them directions but the video breaks. 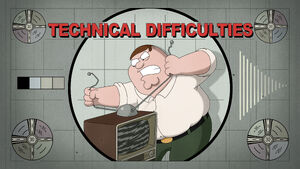 Having received the instructions off-camera, the Griffins go to Das Gym from the first cutaway gag of the series, where a scrawny Hitler is shown angrily staring at a muscular Jew. Lois debates whether it's ethical to take the life of another human being and Brian berates her for even considering showing decency toward Hitler and Chris in turn calls Brian out on his annoying liberal politics. The family's quarreling is interrupted by Meg, returning with the severed head of Hitler, having already done the deed. The family finally returns home and witnesses Principal Shepherd's principal party, where Principal Shepherd offers them a drink. Suddenly, Peter wakes up on the beach, discovering it was all just a dream, caused by him getting sick and passing out from eating tainted oysters. Peter asks to go home and Lois obliges but first goes to throw away a piece of trash in the beach trash can, only to get attacked by a swarm of bees.

Retrieved from "https://familyguy.fandom.com/wiki/Cutawayland?oldid=229976"
Community content is available under CC-BY-SA unless otherwise noted.