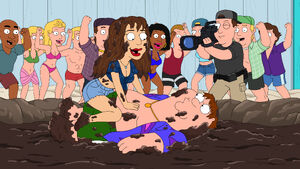 Daisy Fuentes (born November 17, 1966) is a Cuban-American television host, comedian and model, known for her acting work in Loving, Baywatch and A New Leaf.

Daisy appears as herself in "Peter & Lois' Wedding" when she is bribed by Carter Pewterschmidt to set Peter up by kissing him at his bachelor party, infuriating Lois who breaks off their wedding. Peter tries to get her back, but nearly fails and tell Daisy confesses that she was paid off by Carter to kiss Peter.

Retrieved from "https://familyguy.fandom.com/wiki/Daisy_Fuentes?oldid=216556"
Community content is available under CC-BY-SA unless otherwise noted.