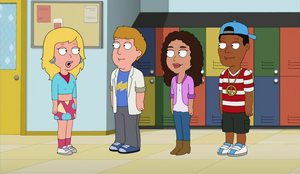 Dakota is a character in Parent Boppers with Dylan Flannigan on the Disney Channel as it films in Rhode Island in "Brian's a Bad Father". When she addresses the other characters during a shoot, she refers to them as her "multicultural group of friends."

After Brian gets Dylan to arrange to get him hired on the show as a writer, he begins making changes such as having Dylan threatening to kill himself in front of Cameron and another girl when they complain of having to wear bicycle helmets. The director also claims that in the previous day, Brian had suggested that Dakota try to give herself an abortion by punching herself in the stomach during her volleyball tournament.

Dakota is voiced by Ashley Benson.

Retrieved from "https://familyguy.fandom.com/wiki/Dakota_(Brian%27s_a_Bad_Father)?oldid=187756"
Community content is available under CC-BY-SA unless otherwise noted.