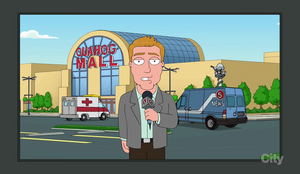 Dallas Portland is a news reporter with Quahog 5 News.

When Peter is left behind at the Quahog Mall in "The New Adventures of Old Tom", Dallas covers the story and immediately attracts Lois and the other guy's wives. They gather to watch as a group, leaving Peter alone. He complains at The Drunken Clam to Jerome and finds company in a drunken Tom Tucker who hates the new guy. Peter suggests they work together to improve Tom's image as a “young guy.” Peter joins Lois to watch the newly made-over Tom, but his act fails and he is fired. Lois is upset with Peter and he points out her infatuation with Dallas, although she still insists on him trying to make it up to Tom. He visits him at his apartment but his help is rejected. Peter exits to see Tom standing on the rooftop preparing to jump. Peter rushes to the rooftop and Dallas arrives right behind him to cover the act. However, Peter insists that he is the one who plans on jumping and gives Tom the interview, getting his job back for him.

Retrieved from "https://familyguy.fandom.com/wiki/Dallas_Portland?oldid=209998"
Community content is available under CC-BY-SA unless otherwise noted.