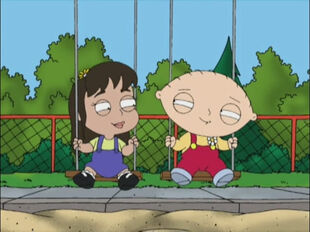 Dammit Janet!
When he is enrolled in a daycare facility, Stewie falls in love with another baby named Janet. 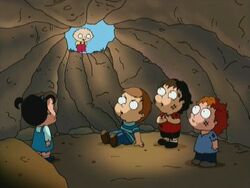 When Stewie demonstrates that he doesn't play well with other children, Lois decides to put him in daycare. However, Lois soon becomes bored without his company and, seeking some excitement, decides she'd like to take on a part-time job. Peter refuses until he finds out from Quagmire that husbands of flight attendants can travel for free, at which point he strongly encourages Lois to become a flight attendant. 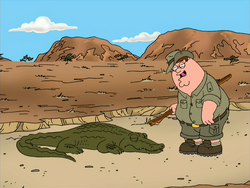 Lois soon discovers that life as a flight attendant is far from glamorous and is, in fact, very exhausting. At the same time, Peter is traveling far and wide, unbeknownst to Lois. When she tells Peter she's thinking of quitting her job, Peter encourages her to continue on so he can still reap the travel benefits of being her spouse. But when Peter ends up on the same flight as Lois, she discovers what he's been up to and becomes furious with him. She drags him off to the lavatory to discuss the matter, just as the plane is being hijacked to Cuba.

All the passengers are returned home safely, except for Lois and Peter, who went unnoticed in the locked lavatory. They end up being stuck in Cuba for two weeks waiting for their passports to arrive. They try to unsuccessfully buy some passports on the black market, but ultimately resort to boarding a raft of refugees. At this moment, Lois realizes she has no need for the excitement she was seeking, because being married to Peter provides plenty of it. 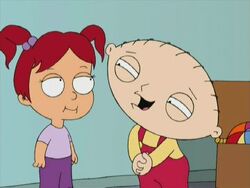 Meanwhile, Stewie becomes smitten with a little girl at the daycare named Janet. He attempts to get close to her, even spelling his affection out for her through song. However, she shows interest in another boy, which causes Stewie to fall for her even harder, attempting to make her jealous by pretending to be in a relationship with another girl. When Janet finally expresses her interest in Stewie, he is elated, but then he realizes she's only been interested in his cookies. Stewie is crushed, trying hard to hold back his tears.

Retrieved from "https://familyguy.fandom.com/wiki/Dammit_Janet!?oldid=216426"
Community content is available under CC-BY-SA unless otherwise noted.