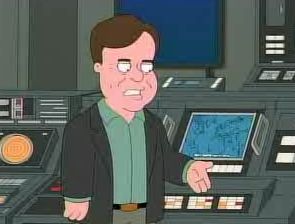 Daniel Edward "Dan" Aykroyd, CM (born July 1, 1952) is a Canadian-American comedian, actor, screenwriter, musician, winemaker and ufologist. He was an original cast member of Saturday Night Live, an originator of The Blues Brothers (with John Belushi) and Ghostbusters and has had a long career as a film actor and screenwriter. He also voiced Yogi Bear in the live-action film of the same name.

Aykroyd as Elwood Blues fetches a bag of Cheez-Wiz for Stewie in "Sibling Rivalry.

He and Chevy Chase carry out a mission as spies appointed by Ronald Reagan in "Spies Reminiscent of Us". They use Cleveland Brown's old residence as Quahog headquarters.

Dan is named when Peter had God list every single cast member of SNL in alphabetical order in "Are You There God? It's Me, Peter".

Retrieved from "https://familyguy.fandom.com/wiki/Dan_Aykroyd?oldid=210708"
Community content is available under CC-BY-SA unless otherwise noted.