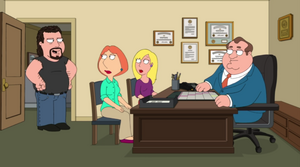 Daniel Richard McBride (born December 29, 1976) is an American actor, comedian, and writer, known for his work in Pineapple Express, Tropic Thunder, Up in the Air, This Is the End, Alien: Covenant, Despicable Me, Kung Fu Panda 2 and the Angry Birds films.

In "Connie's Celica", Peter compares Chris' ability to only play a single note on the recorder to Danny McBride. Later in the same episode, he is called into Principal Shepherd's office to be reprimanded for his typical hijinks.

Retrieved from "https://familyguy.fandom.com/wiki/Danny_McBride?oldid=225854"
Community content is available under CC-BY-SA unless otherwise noted.