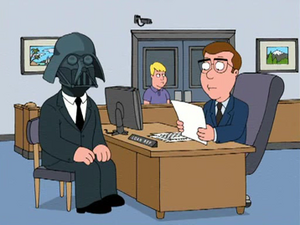 Darth Vader, born Anakin Skywalker, is a fictional character and the central antagonist in the Star Wars saga, George Lucas's six-film science fiction saga. Vader originally appeared as the Empire's villainous enforcer in the original Star Wars trilogy. He is played by David Prowse inside the costume and is voiced by James Earl Jones in the original trilogy, and in the prequel trilogy, played by Jake Lloyd, and then Hayden Christensen.

He provides the central theme to the six Star Wars movies, the original trilogy describing the defeat of the Imperial Forces which Vader commands, and his eventual conversion from the "Dark Side", whilst the subsequent prequel trilogy concentrates upon Vader's youth and conversion to the "Dark Side". He provided a suitably evil and frightening "bad guy" character in the original Star Wars trilogy, and more generally has come to epitomize the forces of evil. Proving that imitation is the sincerest form of flattery, Darth Vader parodies and references, notably to his characteristic voice and breathing, appear throughout modern humor, Family Guy being no exception.

In "Mother Tucker", Vader is seen working as a meter maid writing a parking ticket, then being insulted on his narrow life and lack of vision by the business man whose car is involved, when Vader refuses to withdraw the ticket. Darth goes home and recounts the incident to his wife, who confirms she will support him in all his endeavors. Intent on pursuing his dream, and confounding the business man's insult, he goes to the bank to secure a loan to finance construction of the Death Star. He hastily changes this to the more acceptable cover story of opening a sports bar, when the bank clerk questions his original proposal.

In "Brian Sings and Swings", Meg sees Chris putting on his hair and hat the same way Vader has his helmet put on in The Empire Strikes Back". It shows Chris' scarred head as the "Imperial March" is played.

He also made a cameo in "Barely Legal", kneeling at the feet of Emperor Palpatine, who had just discovered the key to great Star Wars dialogue.

In "It Takes a Village Idiot, and I Married One", Mayor Lois Griffin claims that Vader is buying yellowcake uranium from unwed teenage mothers in order to get money from the taxpayers to support Lake Quahog.

Peter quotes Vader's line "They are a part of a rebel alliance and a traitor!" in "Padre de Familia".

Hayden Christensen identifies who he is, with intention to go into character, when he shows up to join the spirits Obi-Wan Kenobi, Yoda, and Francis Griffin, in their attempt to encourage Peter Griffin to prove himself to his biological father Mickey McFinnigan in "Peter's Two Dads". This is a parody of the edits within the 2004 DVD re-release of Return of the Jedi, when Christensen, who played Anakin in Attack of the Clones and the then-forthcoming Revenge of the Sith, was inserted over Sebastian Shaw at the victory celebration scene.

In "Three Kings", Peter as Andy Dufrense has several Star Wars figurines in his cell including Vader and General Grievous.

The producers of the films decided to make James Earl Jones's role as Vader voice-only after seeing that he could barely fit in the suit, as seen in "Go, Stewie, Go!"

For Family Guy's parodies of the original movies, Blue Harvest, Something, Something, Something, Dark Side and It's A Trap!, Vader/Skywalker is played by Stewie Griffin, and acquires many of his mannerisms. It is also revealed that Vader had a restraining order made against Obi-Wan Kenobi, portrayed by Herbert, after Episode III, a reference to Herbert's pedophilia.

In the cutaway of Peter setting up his Cutaway gags for the week in "3 Acts of God", Vader asks Peter if he'll need him for a cutaway in the week.

In "The Woof of Wall Street", Brian quotes Darth Vader's line in A New Hope "When I left you, I was but the learner; now I am the master."

He is parodied as "Darth Vapor" in "HTTPete".

In "Family Guy Lite", Horatio, who has learning disabilities, wears a Darth Vader cape from an old costume.

In the appearances not played by Stewie, he is voiced by John Viener.