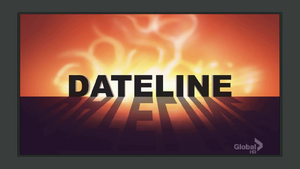 In "If I'm Dyin', I'm Lyin'", NBC executives create a new day, Katilsday, just so they have another opportunity to air Dateline.

In "Family Guy Viewer Mail No. 1" segment "No Bones About It", Lois compares the family’s situation to the human interest stories on Dateline.

While on the way to meet Patrick Pewterschmidt for the first time in "The Fat Guy Strangler", Lois wonders out loud to Chris, Meg, and Stewie if Dateline would be interested in doing a show about her reuniting with her long-lost brother.

In "Ratings Guy", Peter asks the network to reveal the killer right away so he doesn't have to wait through the entire show to find out.

In "Valentine's Day in Quahog", Herbert tunes in to his favorite show ""To Catch a Predator Who's Proud of Being a Predator" hosted by Chris Hansen on Dateline. When he confronts a predator for traveling hundreds of miles to meet a 13 year old, he is disappointing that he isn't meeting with a 14 year old.

Vinny claims that the death of his original owner from a burst scrotum was featured on Dateline in "Life of Brian".

In "Hot Pocket-Dial", the aging host tells the audience that the guy everyone believes does it, really does it before ordering everyone to bed early.

Retrieved from "https://familyguy.fandom.com/wiki/Dateline?oldid=182624"
Community content is available under CC-BY-SA unless otherwise noted.