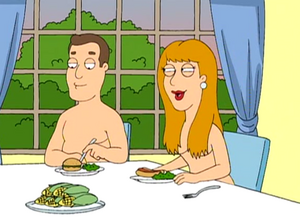 Dave Campbell is the father in Quahog, Rhode Island's family of nudists. His wife is Dotty Campbell and has two children, his son Jeff Campbell and another unnamed toddler.

They debuted in "From Method to Madness", when Peter Griffin saved him from drowning in the ocean. As thanks, they invited him, his wife, and kids for dinner. This was when the Griffins realized that the Campbells were nudists, after originally thinking Dave's bathing suit fell off in the ocean. At one point, Peter accidentally grabbed his penis while searching for his hot dog. The Griffins eventually became friends with the Campbells, despite initial reactions to their choice of fashion.

In "Road to Europe", it is revealed she and Dave are KISS fans, like Peter and his wife Lois. The four attended KISS-stock.

He and his family appeared after a long absence in "Go, Stewie, Go!" to witness Meg Griffin making out with her new boyfriend, Anthony.

He is voiced by Fred Willard.

Retrieved from "https://familyguy.fandom.com/wiki/Dave_Campbell?oldid=225042"
Community content is available under CC-BY-SA unless otherwise noted.