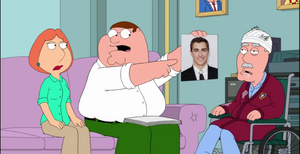 David John Franco (born June 12, 1985) is an American film and television actor known for his work in Superbad, Scrubs and the comedy film 21 Jump Street.

Peter tries to use images of Dave and James Franco while playing the game Celebrity with Carter Pewterschmidt in "Regarding Carter", having been stumped by them while playing against Joe Swanson previously.

Retrieved from "https://familyguy.fandom.com/wiki/Dave_Franco?oldid=208135"
Community content is available under CC-BY-SA unless otherwise noted.