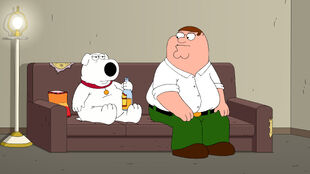 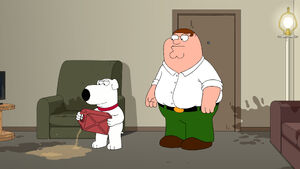 Following a recap of previous episodes including the very last one recounting Brian's marriage to Jess, we find Brian about to burn down his apartment building to fake his own death. Peter convinces him that married life isn't all bad, but he instead adopts self-destructive behavior by way of massive weight gain. When his weight causes him to dislocate his hip, Jess finds that she has to take care of him. As his needs finally become too much for her to bear, she convinces him that she is paying for a hip replacement but she has actually dumped him off at the pound to be euthanized. When Peter discovers this, he rushes to the pound to save Brian and they meet Jess in the lobby. She reveals she is upset because he allowed her to almost die previously from choking and they both believe that they may be truly meant for each other since they both wished each other dead. With their love rekindled, they decide to give it another chance. 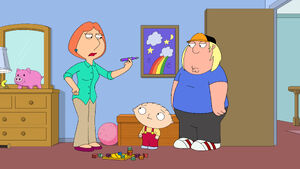 Meanwhile, Chris gets stuck with being Stewie's babysitter when Meg is able to blackmail Peter. Chris takes Stewie to a party where he gets hooked on vaping. Sharing his new passion with Chris, they start vaping together. But when Lois raids Stewie's piggy bank, she discovers the vaping and reads them the riot act and takes the pen, leaving Stewie stuck going cold turkey. He starts to fight Chris for his until they lock lips in a virtual kiss from trying to vape it together and realize how far they've gone. Chris tries to get it from Lois by explaining that it is 'friend's,' but finds her smoking a cigarette. When he tries to call her on her hypocrisy and claims that vaping is cool compared to cigarettes, she takes a photo of his vaping to point out just how stupid he looks.

Jess is revealed to have died during the final commercial break and the family gets angry with one another as secrets are found to have been shared. Taking a break from the fighting, Brian steps outside to dump Jess' ashes in the bushes.

Retrieved from "https://familyguy.fandom.com/wiki/Dead_Dog_Walking?oldid=216303"
Community content is available under CC-BY-SA unless otherwise noted.