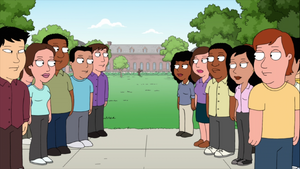 Dean Distantfaraway is one of the administrators of Brown University in "Meg Goes to College".

When Principal Shepherd provides Peter and Lois with a fake transcript for Meg, she succeeds in being admitted to Brown University. But when Peter decides to stay at the college as well, his shenanigans annoy Meg to the point that she calls him out for being a fake student. When he points out that her transcript was fake as well, Dean Nearby overhears him and suspends Meg.

As the family tries to figure out what their next move is, Brian points out that most of the stuff on her transcript wasn't really fake, and that she can succeed in doing it. Dean Distantfaraway starts Meg on her trials to prove she can do the things her application claimed she could do.

Retrieved from "https://familyguy.fandom.com/wiki/Dean_Distantfaraway?oldid=232839"
Community content is available under CC-BY-SA unless otherwise noted.