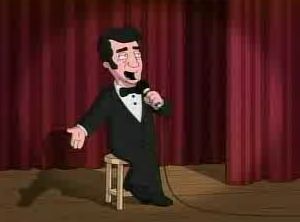 Dean Martin (June 7, 1917 – December 25, 1995) was an American singer, film actor and comedian. Martin's hit singles included "Memories Are Made of This", "That's Amore", "Everybody Loves Somebody", "Mambo Italiano", "Sway", "Volare" and "Ain't That A Kick In The Head?". One of the leaders of the "Rat Pack", he was a major star in four areas of show business: concert stage/night clubs, recordings, motion pictures, and television.

In "Tales of a Third Grade Nothing", Frank Sinatra, Jr. tells Dakota and New Bedford stories about his youth. He claims Martin was the only one on the golf course who had a five-iron with a cork con the end of it.

He appears with Frank Sinatra and Sammy Davis, Jr. in "Jerome Is the New Black" singing racist songs that were perfectly acceptable through the 1950s-1960s. On the album, he contributed "Chinaman's Chance", and sang "Hey There, Fruity" with Sinatra and Davis, Jr.

Dean's spirit advises Peter to treat Lois with Italian charm in order to win her back in "Boopa-Dee Bappa-Dee".

Peter is inspired by a Dean Martin roast infomercial to ask his friends to throw him a roast in "Roasted Guy".

Martin is voiced by John Viener.

Retrieved from "https://familyguy.fandom.com/wiki/Dean_Martin?oldid=177669"
Community content is available under CC-BY-SA unless otherwise noted.