Death, also known as the Grim Reaper, is a recurring character on Family Guy. When people die, he comes to collect them. He is a mama's boy who lives with his mother and finds it hard to interact with women, likely because during his teen years he is shown to have a habit of killing girls while with them. He has also stated that he has lost his gag reflex due to taking part in films he is not proud of, as is evident when he eats a turkey leg off the bone in less than 3 seconds. Death is only responsible for human beings. When dogs die, he brings his dog.

In "Death Is a Bitch", Death suffers a sprained ankle while trying to chase Peter, and has to rest up at the Griffins'. Concerned that people must not learn that the rules of death have been suspended, Death sends Peter to do his work, lending Peter his cloak and scythe. In the meantime, Death stays in the living room wearing a Providence College sweatsuit loaned to him by the Griffins. 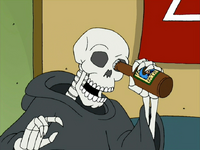 In "Wasted Talent", he goes to a frat house where the members drank themselves to death trying to win the contest. After sitting down and helping himself to several of their beers by using his eye socket as a bottle opener, he leaves and backs into a police car while intoxicated.

During "Death Lives", Peter helps Death to get a date with Amy, an assistant in a pet store. When they finally get together over a coffee, Death discovers that her views on animals are irritating and boring, so he touches her with the usual results, she falls dead, spilling her coffee, as he calls for the check. Death in return helps Peter out with his relationship with Lois, as he also did in "Meet the Quagmires", where he allows Peter to travel back in time to 1984 repeatedly to initially live a life of bachelorhood, and then to try and save his marriage with Lois. During their adventures, Peter pulls down his hood, revealing a skull with snakes and bugs crawling all over it.

In "Mr. Saturday Knight", he brings his dog to claim Brian Griffin, but because Jonathan Weed ended up choking to death on the roll instead, they take him.

In "Family Guy Viewer Mail No. 1" a young Quagmire, in an argument with the young Peter over who was braver, bets Peter is too chicken to laugh at Death in the face. Peter does this with extreme confidence, and Death, who is wearing a pro-smoking T-shirt, responds by proclaiming that his chances of fitting in have decreased because of what had just happened.

In "The Perfect Castaway", he shows up to point out the giant wave about to capsize the S.S. More Powerful Than Superman, Batman, Spider-Man, and the Incredible Hulk Put Together.

In "I Take Thee Quagmire", he comes to Glenn Quagmire's staged funeral after meeting with NBC about the fate of Joey. He ends up taking his wife Joan Quagmire, and two men who high five him.

He makes a cameo as a performer of "Peter is Slow" in "Petarded".

In "Meet the Quagmires", Death comes to check on Horace, the bartender at The Drunken Clam after he falls off of a ladder. Bored with his life, Peter talks Death into letting him see what his life would have been like if he had chosen to liven it up more. 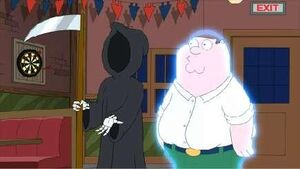 Death gives Peter a glimpse of what life would be like without alcohol in "Friends of Peter G", after Peter is killed in a car crash. He advises Peter to drink responsibly.

When Death dies in a traffic accident caused by Carter Pewterschmidt in "Grumpy Old Man", Superdeath arrives to oversee his transition. Death wonders if he'll go to Heaven but Superdeath tells him he's being reincarnated in China. Death disappears but quickly reappears with the two noting he'd been born a girl in China.

Death comes to pick up a mailman killed by Stewie with his ray gun in the special opening of "Bigfat".

Death returns in "3 Acts of God", to tell Cleveland his show had been canceled and is asked by Peter to meet God. He agrees and brings them to Heaven.

Death was voiced by Norm MacDonald in "Death Is a Bitch". He was unable to reprise the role, as he was committed to A Minute with Stan Hooper. The role was given to Adam Carolla, who voiced him for all further appearances.