Death Has a Shadow 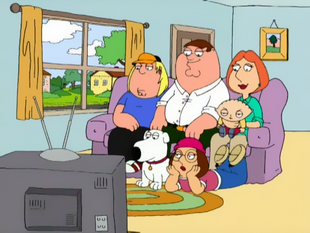 Death Has a Shadow
Peter loses his job, but finds a fortune in welfare fraud.

Plot: As Lois prepares dinner, Stewie puts the final touches on his mind-control device, only to be taken away from him by Lois, who won't allow 'toys' at the table.

Later, Peter asks Lois for permission to attend an upcoming stag party. After he promises he won't drink, Lois lets him go. Unfortunately, Peter does not heed his wife's advice and plays such drinking games as "Drink the beer". He goes to work the next day with a hangover, and falls asleep on the job as a safety inspector in a toy factory. Peter misses such things as a butcher knife, surge protector, gasoline can, razor blades, a porcupine, toaster with forks inside and plug in water. The company receives bad press after releasing unsafe toy products, and Peter is promptly fired. 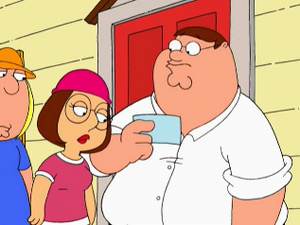 At dinner, he breaks the news to his children, but decides to keep it from Lois. Peter tries different jobs, such as cereal mascot and sneeze guard but fails miserably. Brian pressures him to tell her the truth, but all he manages to do is to tell Lois how fat she is. Brian insists that Peter must look out for his family's welfare.

With the word "welfare" in his mind, Peter soon applies for a government assistance at a welfare office. But a processing error creates a weekly check for $150,000. Telling Lois he received a big raise, Peter spends his money on many foolish things. Peter rents the Statue of David, treats Meg to cosmetic surgery and even goes so far to surround his house with a moat to protect them from the black knight. 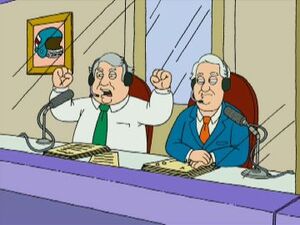 Unfortunately, Lois is given the welfare check by the mail lady and storms at Peter. Peter decides to return the money to the taxpayers by dumping it from a blimp during Super Bowl XXXIII, and Brian accompanies him. They end up in prison.

Eventually, Lois receives the bad news and goes to court, where the judge sentences Peter to 24 months in prison. Lois tries to explain he's not that bad and she loves him, and insists that no matter what, she will always stand by her husband. The judge agrees, and sends her to jail with him. Stewie, being a baby, must have his parents by his side, regardless of his burning hate for them. He then whips out his mind control device and forces the judge into letting his father go free and get his job back.

Peter states that he has learned his lesson and will never do it again. Instead he is going to try for such things as a minority scholarship, sexual harassment suit, and a disability claim.

Previous Episode /// Death Has a Shadow \\\ Next Episode