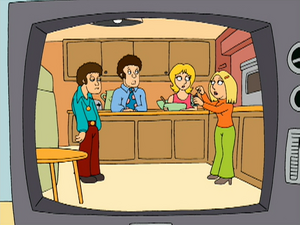 [We are introduced to the Griffins, who are sitting watching an episode of "The Brady Bunch"]
Jan: Mom, Dad, I found cigarettes in Greg's jacket.
Mike: Greg, were you smoking cigarettes?
Greg: No, Dad.
Mike: [to Carol] Well, he's lying, there's no doubt about that. [to Greg] Greg, I'm afraid your punishment will be four hours in the snake pit. [Mike pushes a button revealing a trap door in the floor] Maybe that'll give you some time to think about what you've done.
Greg: Aw, man. [dives in]
Jan: That'll teach him.
Mike: And, Jan, I'm afraid you've earned a day in the chamber of fire for tattling on your brother. [pushes a button and unlocks a steel door with roaring flames behind it]
Lois: Uch! Smoking! How does a boy like that go so wrong?
Peter: Well, they live in a crummy neighborhood.
Brian: The Bradys?
Peter: Oh, hell, yeah, they got robbers, thugs, drug dealers, aw, you name it.
[a black woman with a plate full of pancakes appears at the window]
Black Woman: You folks want some pancakes?
Peter: No, thank you. See, the worst that we got is Jemima's Witnesses.

Stewie: Damn you, vile woman! You've impeded my work since the day I escaped from your wretched womb!

Meg: Mom, can I turn the heat up?
Lois: Oh, don't touch the thermostat, Meg, your father gets upset.
Meg: Come on. This thing goes up to 90.
[adjusts the heat, and Peter enters the room quickly]
Peter: Whotouchedthethermostat?
Meg: God, how does he always know?
Peter: Brain implant, Meg. Every father's got one. Tells you when the children are messing with the dial.
Father #1: Hey, Peter, my thing went off, your thermostat okay?
Peter: Yeah, s'alright.
Father #2: Hey, is my kid over here?
Father #1: Forget it, false alarm.

Peter: Come on, you're worryin' about nothin'.
Lois: Oh? Remember when you got drunk off the communion wine at church?
[cut to a priest giving a sermon at church]
Priest: And so the Lord God smote poor Job with festering boils all over his body...
God: [sitting in one of the pews] Aw, man, I hate it when he tells this story.
Priest: ...yet, miraculously, Job was still able to maintain his dignity.
[Peter is seen drinking lots of communion wine, he coughs]
Peter: Woah, is that really the blood of Christ?
Priest: Yes.
Peter: Man, that guy must've been wasted 24 hours a day, eh?
[cut back to the kitchen]
Lois: And then there was that time at the ice cream store.
[cut to the family at an ice cream store]
Peter: Aw, butter rum's my favorite. [licks and passes out immediately]
[cut back to the kitchen]
Brian: And remember you had an Irish coffee the day we went to see Philadelphia?
[Cutaway to a movie theater. Everyone is crying, except for Peter who stares blankly, then claps his hands]
Peter: I got it. That's the guy from Big. Tom Hanks! That's it, aw, funny guy, Tom Hanks! Everything he says is a stitch.
Tom Hanks: [on movie screen] I have AIDS.
Peter: HAHAHAHAHAHAHAHAHA!!!

Quagmire: Hey, who wants to play "Drink the Beer"?!
Peter: Right here! [chugs a can]
Quagmire: Heh, you win!
Peter: All right! What do I win?
Quagmire: Another beer!
Peter: Oh, I'm goin' for the high score!
Quagmire: Well, actually, Charlie's got the high score.
[pan to Charlie standing in front of a grandfather clock]
Charlie: Hey, man, your clock won't flush!

Peter: Now, kids, Daddy only drank so the Statue of Liberty would take her clothes off.

Mr. Weed: How're you coming, Johnson?
Johnson: Well, Mr. Weed, I've been workin' on the new G.I. Jew line and as you can see, they look great!
G.I. Jew: You call these bagels?
Johnson: [rolls eyes] WooOOOOOOAaah! I'm glad he's on our side!

Mr. Weed: Peter, I am appalled. Your negligence has damaged this company's reputation. YOU'RE FIRED!
Peter: Ah geez. For how long?

Meg: Oh, my God, you got fired?!
Chris: Way to go, Dad! Fight the machine!
Stewie: How do you know about the machine?

Peter: Look, kids, there's still going to be food on this table, just not as much so it won't get competitive.
Meg: Who cares about food? Now I'll never be able to afford my collagen injections!
Brian: Hey, uh, Peter, can we put her out in the yard?

Peter: How the hell am I going to break this to Lois? If she finds out I got fired for drinking, she's going to blame me!
Peter Devil: Lie to her. It's easy to lie to women, they're not people like us.
Peter: Oh, I dunno. [looks at his other shoulder] Hey, where's the other guy?
[cutaway to the Peter Angel stuck in traffic]
Peter Angel: C'mon, ya bastard, I'm late for work! [drinks coffee, spills on clothes] Oh-ohh-oh, this is perfect.

Peter: Not a word to your mother about me getting canned.
Lois: What's that, Peter?
Peter: Nothing, honey. Ooh, the lost-my-job smells great!
Lois: Excuse me?
Peter:: Uh, Meg, honey, could you please pass the fired-my-ass for negligence?
Lois: Peter, are you feeling okay?
Peter: I feel great. I haven't got a job in the world!

Lois: Now, I know you all hate eggplant but... [a blue laser shoots through her right side, startled] What on Earth was that? [everyone then stares at Stewie, with a nozzle between two slices of bread]
Stewie: What the deuce are you staring at? It's tuna fish. [pushes button on sandwich, hides nozzle] And nothing else.

Brian: Hey, how's your job search going?
Peter: Aw, it sucks, Brian. I've already been through two jobs this week. I got fired off that commercial.
[cut to Peter in a studio dressed as a bird holding a bowl of cereal]
Director: Try it again.
Peter: I'm caca for Cuckoo Puffs.
Director: No!!! Dammit, take 26.
[cut back to Peter and Brian]
Peter: And then I had that job as the sneeze guard for the salad bar at that restaurant.
[cut to a restaurant, Peter is dressed in a policeman's uniform standing next to an old lady]
Old Lady: Ah-ah-ah—
Peter: [brandishing a gun] Take it outside, lady.
[cut back to Peter and Brian]
Peter: And then I thought I could win some money in that talent show.
[cut to a scene from "The Sound of Music"]
Max Detweiler: And the grand prize goes to: The Von Trapp Family Singers!
[Peter is dressed in leiderhosen with a sousaphone]
Peter: Oh, that is bull...

Brian: Peter, I know it's a dangerous precedent, but you might just wanna tell Lois the truth.
Peter: What, that I can't provide for my family, t...that she's always right? That I didn't really stand up to that tank at Tiananmen Square?
[cutaway of Peter standing next to the real guy who stood up to the tank]
Peter: Ah, screw this, I just came over to buy some fireworks!

Stewie: Blast you and your estrogenical treachery!

Peter: I hate lying to Lois. It's just... It's the best way to keep her from knowing the truth.

Peter: We're officially on welfare. Come on kids, help me scatter car parts all over the front yard.

Reporter: Mr. President, why do you think the public has continued to support you during these impeachment proceedings?
Bill Clinton: Um, probably because you're so fat! Huhuhuhuhuh!

Lois: Oh, my God! Peter, you bought the statue of David?!
Peter: No, I just rented it. They're gonna be ticked, though, the penis broke off when I packed it into the car.
[throws the penis and it breaks into Mr. Weed's house]
Mr. Weed: I shall call you Eduardo.

Lois: Come on, Peter, what's the big surprise?
Peter: Well, Lois, you know how I said you should be treated like a queen? Well I got you your own jester.
Jerry Seinfeld: [dressed as a medieval jester] Hey, guys! Great to be here in New England. And what's the deal with New England? It's over 200 years old! Last time I checked that's not that new.

Nancy the Postal Lady: Well, congratulations on all your success. Here's your welfare check.
Lois: What the...

John Madden: Pat, I think it's safe to say that all these fans came here to watch a game of FOOTBALL!
Pat Summerall: Uh, John, we're in commercial.
John Madden: Yeah, I know, I'm just..making conversation. Come on... FOOTBALL!

Brian: Amazing, you can barely drive a car and yet you're allowed to fly a blimp?
Peter: Yeah, American's great, isn't it? 'Cept for the south.

Stewie: Hello, Mother.
Lois: Well, hi there, sweetie.
Stewie: You know, Mother, life is like a box of chocolates. You never know what you're going to get. Your life, however, is more like a box of ACTIVE GRENADES! Now, I offer you one last chance for deliverance. Return my mind control device or be destroyed!
Lois: Oh, you just want your toy back. Okay, here you go, honey.
Stewie: Yes...well...VICTORY IS MINE! [runs away into another room, an explosion is heard] AAAAHHH!!!! DAMN YOU ALL!!!!

Peter: Aw, Lois, am I glad to see you.
Lois: I got nothing to say to you, Peter.
Peter: I gave the money back, why are you still steamed?
Lois: Peter, you lied to me, you betrayed my trust. Compared to that, welfare fraud doesn't even matter.
Peter: Really? Ah, let's hope the judge feels that way.

Judge: Mr. Griffin, don't you think you should've alerted the government of such a gross overpayment.
Peter: Well, I was gonna call 'em, but, uh, my favorite episode of Diff'rent Strokes was on. You know the one where Arnold and Dudley get sexually molested by the guy who owns the bike shop.
[cutaway to said episode]
Guy Who Owns the Bike Shop: Alright, now, I want you boys to scream real loud at my ass.
[cut back to Peter]
Peter: And everybody learns a valuable lesson.
Judge: Mr. Griffin, have you learned a lesson?
Peter: Oh, yeah, stay the hell away from that bike shop!

Judge: Mr. Griffin, I think your words have touched us all. I'm sentencing you to 24 months in prison!
Lois: Oh no!
Brian: Oh no!
Chris: Oh no!
Meg: Oh no!
Kool-Aid Man: [jumps through the wall] OH YEAH!

Stewie: 24 months in prison, eh? Unacceptable! Intolerable as it may be, I'm completely dependent upon those wretched drones for sustenance. Let us see how the iron constitution of American justice stands against the device!
Judge: Is that your boy?
Peter: What? Uh, oh, uh, yeah, that's Stewie.
Judge: Gosh, I can't separate a kid that young from his father. It's...It's unjudgmentally. Aw, hell, you've learned your lesson, right?
Peter: Yeah.
Judge: Alright, you're off the hook.
Peter: Oh, wow! Can you give me my job back?
Judge: No. [Stewie activates the device on him] Yes.
Peter: All right!

Meg: I sure am gonna miss being rich.
Peter: Oh, don't worry, I got a way to get money.
Brian: Not another welfare scam.
Peter: No no no, [puts on a ushanka] minority scholarship. Hehehehehe... [winks and does a thumbs up to the camera as if the show is over]
The Griffins: Nooooo....
Stewie: Are you insane?
Peter: Okay, I mean, uh uh uh... [takes the ushanka off and puts on a blonde wig and rips his shirt open] sexual harassment suit. Hehehehehehe...
Lois: I don't think so...
Brian: No...
Stewie: Absolutely outrageous.
Peter: [takes the blonde wig off and proceeds to strike himsef with a baseball bat] Uh uh uh okay, disability claim!

Retrieved from "https://familyguy.fandom.com/wiki/Death_Has_a_Shadow/Quotes?oldid=212541"
Community content is available under CC-BY-SA unless otherwise noted.