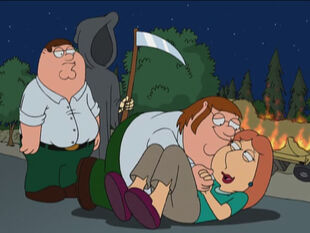 Look how thin I was!

Death Lives
When Peter skips out on his and Lois's anniversary, he is knocked out by a lightning strike, and has a near-death experience. 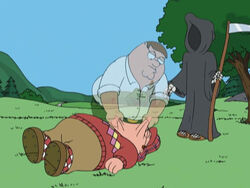 On their wedding anniversary, Peter sends Lois on a scavenger hunt so he can play golf at Barrington. There, he is struck by lightning and has a near-death experience in which Death tries to show Peter that his marriage is in trouble. Death states that due to Peter ignoring their marriage, Lois eventually divorces Peter and two years after the divorce, Peter commits suicide. In exchange Peter helps Death get a date with Amy, a pet shop assistant.

Death takes Peter back in time to his courtship of Lois. Peter did not make a good impression on Lois’s father, Carter Pewterschmidt, who knocked him out and had his servants drop him from a plane into the ocean. 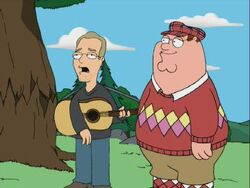 He was rescued by the U.S. Navy aircraft carrier on which Quagmire served. Back ashore, Peter gets a ride with Cleveland Brown back to Rhode Island pursued by members of the Ku Klux Klan, where he refuses Carter’s offer of $1 million to stay away from his daughter.

Peter realizes that he has not appreciated his wife as much recently, and once he’s back in his body, he asks Death to pay a visit to Peter Frampton whom he convinces to serenade Lois with their song. At the end of the episode, however, Death does not enjoy his date with Amy, as she harps on about animal rights, so he touches her, resulting in her death while he asks for the check.

Retrieved from "https://familyguy.fandom.com/wiki/Death_Lives?oldid=216411"
Community content is available under CC-BY-SA unless otherwise noted.