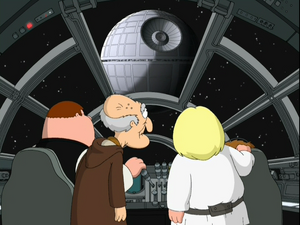 The Death Star is a fictional moon-sized space station and superweapon appearing in the Star Wars movies and expanded universe. It is capable of destroying a planet with a single destructive beam.

In "Mother Tucker", Darth Vader is working as a meter maid, and is writing a ticket, when a business man comes up and tries to stop him from writing the ticket, Vader does not stop. After being insulted, Darth goes home and tells about it to his wife. After telling him she will support him in all his endeavors, he goes to the bank and tries to get a loan to financing the Death Star.

Stewie Griffin’s air battle in "Chitty Chitty Death Bang" and "Emission Impossible" with Peter’s sperm parodies that of both Luke Skywalker in A New Hope and the Millennium Falcon attack in Return of the Jedi with one of Peter’s testicles representing the base.

The Death Star is also heavily featured in the climax of Blue Harvest, fulfilling its role from the film, A New Hope, the special parodies.

The Death Star appeared in "Brian Griffin's House of Payne" in the shape of Peter's face in Stewie's imagination. In reality, he was using his spaceship toy to pretend to attack his father's face.

The second Death Star is under construction in It's A Trap!, just as it was in Return of the Jedi. Power Station performs inside it.

Retrieved from "https://familyguy.fandom.com/wiki/Death_Star?oldid=119276"
Community content is available under CC-BY-SA unless otherwise noted.