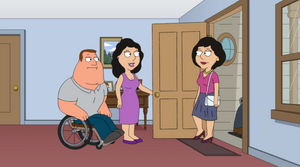 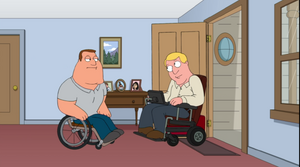 Denise is Bonnie Swanson's sister. She, along with her husband Wendell, tend to annoy Joe in "Shanksgiving" because he considers Wendell a show off. Wendell also has a habit of referring to Joe as 'Joseph' despite his insistence that it is simply 'Joe.'

Later in the same episode, when Joe proves to Peter that he can imitate anyone thanks to his years of undercover work, including a convincing portrayal of Chris. when Peter offers to take Chris to a Red Sox game, Chris demurs from standing up saying he has a charlie horse, so Peter offers to take Wendell instead. When Wendell arrives, he refers to Chris as 'Christopher' and is similarly reminded that it is just 'Chris.'

Retrieved from "https://familyguy.fandom.com/wiki/Denise_%26_Wendell?oldid=217028"
Community content is available under CC-BY-SA unless otherwise noted.