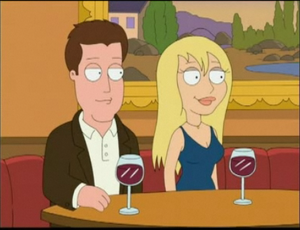 Derek Wilcox was the husband of Jillian Russell, whom she married in "We Love You, Conrad". He can speak both French and Mandarin Chinese languages fluently. Brian Griffin, his wife's ex-boyfriend, thinks that Derek is a superperson of sorts because he is able to do many interesting things like fix a broken elbow or catch three falling wine glasses of wine without spilling a drop. Trying to see if Derek has any bad qualities, he checks up on him in the bathroom only to be frustrated at the fact that Derek most likely has a large penis. During the reception, he and his bride are seen kissing each other lustfully.

Derek and his new wife appeared with a majority of Quahog residents in the ninth season premiere, "And Then There Were Fewer". Peter regards Derek as a God when his phone has a picture of him "holding" the Hollywood sign. In an attempt to contact the police, he made his way to the roof to try and get a signal on his phone, he succeeded, but before he could contact the police, Derek was killed by Diane Simmons by hitting him with one of James Woods's Golden Globe Awards, and then dropping him. Diane then hid the award in Tom Tucker's bedroom, providing more proof for framing him.

Derek is voiced by John Viener.

Retrieved from "https://familyguy.fandom.com/wiki/Derek_Wilcox?oldid=229656"
Community content is available under CC-BY-SA unless otherwise noted.