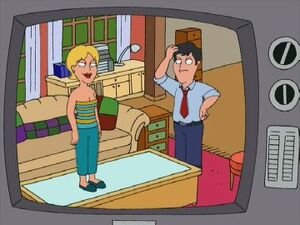 Dharma & Greg is an American television situation comedy co-produced by Chuck Lorre Productions, More-Medavoy Productions and 4 to 6 Foot Productions in association with 20th Century Fox Television for ABC. It first aired from September 24, 1997, to April 30, 2002, and starred Jenna Elfman and Thomas Gibson as Dharma and Greg Montgomery, a couple who married instantly on their first date despite being complete opposites.

In "There's Something About Paulie", the Griffins are watching the show.

In the introduction to "Family Guy Viewer Mail", Stewie keeps pushing a button on a laugh box. When Brian asks Stewie where he got the gizmo, he says he got it from the frequently maligned sitcom. Brian jokingly declared he was surprised that there was anything left in it. ABC has been looked down upon for allegedly overusing a bad laugh track in their comedies.

In The Family Guy 100th Episode Special, Seth MacFarlane calls the show awful and asks if the audience is glad the special they're watching isn't a Dharma and Greg clip show.

Show writer Patrick Meighan previously worked as a writer on the show.