View source
watch 01:40
Boba Fett Returns - The Loop
Do you like this video?
Play Sound 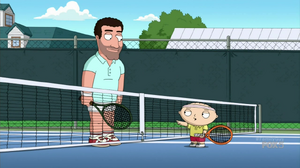 Dimitri is a tennis instructor at the Quahog Racquet Club.

When Brian decides to join the club with Stewie for a doubles tennis tournament in "An App a Day", he claims to be an expert player. But when Stewie arranges for them to practice with Dimitri, Brian blows off practice to hang out with the ladies eating and drinking. When Brian finally joins them, he is forced to admit that he has never played before, which upsets Stewie. But after some practice, they manage to be prepared for the tournament, only to get kicked out when Stewie loses his temper over calls.

During their practice, Stewie notes that one of Dimitri's balls are hanging out of his shorts, which Dimitri claims it is being cooled down.