Dingo and the Baby 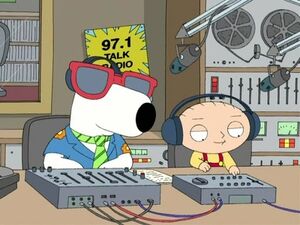 Dingo and the Baby was the name of Brian and Stewie Griffin's radio show on WQHG-FM. It was featured in "Mother Tucker".

It debuted after Stewie crank-called Brian's serious talk show, The Lunch Hour, with hilarious antics. The call saved that show from cancellation, but with Stewie brought in, the show was converted into Dingo and the Baby. Just like Weenie and the Butt, they use old radio sound effects. They were canceled after holding a contest involving nude women catching hot dogs in her mouth which interfered with Brian's attempt at a serious interview with Gore Vidal, which was scheduled before the overhaul.