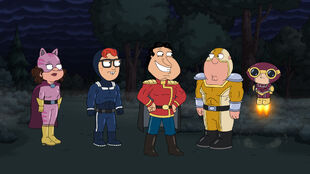 Disney's The Reboot
Family Guy looks for a makeover. 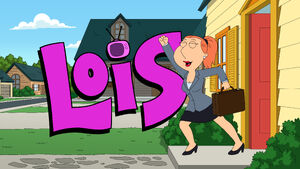 Disney conducts focus groups with the thought of rebooting the show. Their first effort is on Lois, changing her into a busy executive up-and-comer at the Pretty House on the Label Winery with Peter relegated to a house husband. When she's nearly cheated out of a promotion at work, Peter poses as a big executive who credits Lois for landing his contract, Lois is given the promotion but as Peter walks away and removes his mask, Lois pulls his face off to reveal it a mask covering her face since it is her show. The pair continue to pull successive masks off until Peter is left as a bare skull. 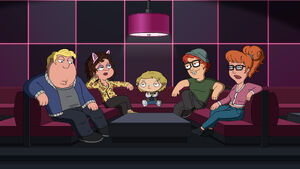 The next effort is titled The Q, a gritty supernatural teen drama. After Meg is killed, the teams all go to a club. When Patty slips away for some air and to get her nipples hard, she is attacked by a wolf. Hearing her scream inside the club, the rest of the teens as well as Quagmire follow, revealing themselves to be minor Marvel characters. Before they can act, Peter kills the wolf, having been the town sheriff all along as it changes to Brian. Trying to figure out what happens next, Chris notes that one of them will go on to become a big movie star, which pretty much ruins the show for everyone else. As he starts to vanish, he celebrates the fact that he is the one that gets to leave. The group is given questions about the episode that were written by Peter, such as asking if the girls should have been given white shirts with black bras. 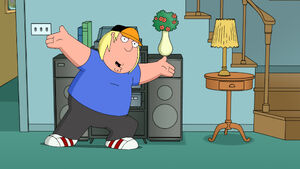 The third effort features most of the cast fired except for Chris and a few secondary characters, having killed the rest off or their having moved away. Chris and Tricia Takanawa are married with Joe sharing a room, but when Joe and his big band record collection becomes troublesome, he is tossed out. The focus group wants to call it quits as Peter angrily confronts them. Finding out they want something binge-worthy, he quickly presents a show that only features a few moments of footage an episode. Bouncing around other ideas, he finds that the group likes other shows so he creates other short versions of them. The host of the group suddenly announces that Family Guy will remain as-is after the executives discover that the orders to change the show came from a squirrel that snuck into the building.

The family is happy just to have the show the way it normally is, although they can see one little concession had to be made as Joe arrives with his big band records with the mandate to include more of him in the show.