Von Jiner: As most unfunny women will tell you, women are very funny.

Peter: Good morning, Goddess. You know, I just want to say again that you were totally right last night to bring up that thing I did wrong eleven years ago and please feel free to bring it up again any time, even if we're talking about something completely unrelated.
Lois: Thank you, Peter. I will.
Peter: [chuckles] I ... I know you will.

Judy Greer: How was your night last night?
Lois: Great. I worked out, made dinner, little family time, and had Peter's ankles up in the air, by 11:00.

Lois: Oh my God! Peter, there's a spider in here!
[Peter is tangled up in a giant spider web]
Peter: Yeah, I know, genius.

Smarmy J. Tiestraightener III: I hit a gay jogger on my way to work today.

Lois: I just don't know what to do about this thing at work.
Peter: Are ... are we still talking about that? I mean, it's fine if we are. We ... we just ... we talked about it before dinner and ... and during dinner and after dinner.

Lois: I'll make a vision board. See my success and be my success.
Peter: My testosterone is so low, I could not have thought of that.

Focus Group Tester: You know what? I don't really get Family Guy.
Von Jiner: What's so hard to get? You just need to have grown up in the 80's but still be a teenager.

Chris: Patty, what's wrong? Why aren't you in bitch class?

Chris: I'm gonna go to a club I'm too young to get into a listen to a band that's owned by the same parent company as the network.

Stewie: Hey! Who left their gender fluid in the shower?

Von Jiner: I know you've been here all day, but it's not like you have jobs to go to, so I'm going to show you one more reboot idea.

Chris: No, still no kids, but I've been practicing a lot by myself.

[Chris talks to "Stewie" on the phone in his spin-off series]
Chris: Okay, give my love to Brian and Meg and hopefully we can come down there for the season finale. No? You're just not gonna be a part of this at all? Okay, then, bye Stewie.

[Peter enters the focus group testing room]
Peter: Everybody shut up!
Focus Group Tester: Hey, it's that sheriff from The Q! 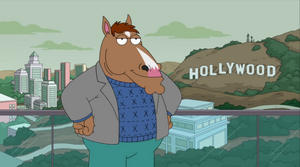 Focus Group Tester: That was terrible. Netflix should make 800 more of those.

Focus Group Tester: I thought I read you guys were phasing out gay jokes.
Peter: That quote was taken out of context and widely misunderstood.

[Lois reports on Olympic diving]
Lois: Guys, just so sorry that any of this is happening, I mean, even once every four years just seems like way too much.

[Jerome shows up in a reboot, where everybody has a John Benjamin voice]
Jerome: What can I get for you guys? ... Nobody touches my voice.

Retrieved from "https://familyguy.fandom.com/wiki/Disney%27s_The_Reboot/Quotes?oldid=215789"
Community content is available under CC-BY-SA unless otherwise noted.