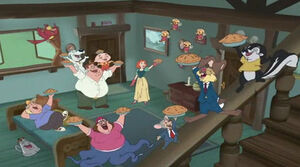 The Disney Universe was the eighth universe visited by Stewie and Brian in "Road to the Multiverse". The universe was one in which the characters were drawn in the animation style seen in Pinocchio, Lady and The Tramp, Bambi, The Little Mermaid, Winnie the Pooh, Snow White and the Seven Dwarfs, and Beauty and The Beast.

However, the tables flipped when Mort Goldman arrived at the Griffin Home, causing all the characters to beat him up due to being Jewish, a reference to the rumor that Walt Disney was an anti-Semite. This is the only universe to have a song in the broadcast episode.