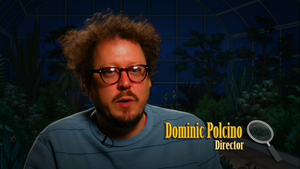 He has directed the following episodes:

Polcino also appears in animated form in the background of the Cantina scene, over Greedo's (played by Bruce the Performance Artist) shoulder in Blue Harvest as well as background characters in other episodes.

Retrieved from "https://familyguy.fandom.com/wiki/Dominic_Polcino?oldid=220534"
Community content is available under CC-BY-SA unless otherwise noted.