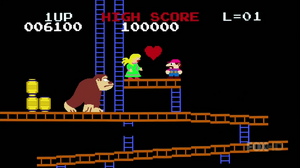 Donkey Kong is an arcade game that was Nintendo's first significant success in North America and was also the very first Mario game.

When the family finds out that Chris as made a female doll in "Encyclopedia Griffin", Peter considers it even weirder than a secret level in Donkey Kong. As Mario pursues Kong through the level, Mario's then-love interest Pauline is killed. Mario and Kong seal up the body in a barrel and roll it into the ocean, agreeing to make up an alibi and head off to the movies in support of aid alibi. Mario asks Donkey Kong if he is any relation to King Kong, but is told that it is simply a common name among apes.

In a 1973 episode of Family Guy in ""Family Guy" Through the Years", Peter and Quagmire both transpose "Viet Cong" with Donkey Kong, with the latter describing battles in the style of gameplay.

Retrieved from "https://familyguy.fandom.com/wiki/Donkey_Kong?oldid=204178"
Community content is available under CC-BY-SA unless otherwise noted.