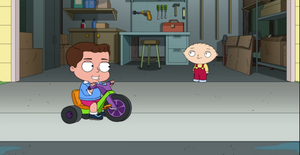 Doug is a boy in the Griffins' neighborhood that Stewie associates with.

In "Island Adventure", he passes by the Griffin home on his big wheel following a rain. He trades bon mots with Stewie over breaking his record for a streak of wet tire tracks.

As Stewie plays with a toy lawn mower in "Movin’ In (Principal Shepherd’s Song)", Doug teases him about mowing the lawn, and Stewie retorts that he would have gotten to it sooner if Doug hadn't borrowed his lawnmower. Doug uses this opening to ask to borrow a shovel to dig to China, and later sends Stewie pictures of his success in indeed reaching China.

Their association begins to take a less-friendly tone when Doug attends Susie Swanson's christening party in "La Famiglia Guy" where he rubs his connections in Stewie's face including getting to sit at in a table for first graders. When Stewie attacks his parent's, Gene and Cheryl's, marriage trouble, the other kids come to Doug's defense, leaving Stewie with egg on his face.

Following his breakup with Zlata in "The Marrying Kind", Doug stop by to rub his bachelorhood in Stewie's face.

In "Young Parent Trap", Doug and the other children of Quahog Preschool have given Stewie the nickname 'poopy fingers', although the latter insists it was only Gulden's spicy brown mustard.

When Brian feels that Stewie has been less than helpful in trying to get him back into shape in "Meg Goes to College", he enlists Doug, who again celebrates one-upping the former. Seeing Stewie's hurt expression, Brian decides to go without exercising at all and aids Doug in getting down the stairs. Aware that Stewie can manage the stairs on his own, Doug is furious, but falls asleep in the middle of his revenge threat.

Doug is voiced by Chris Parnell.