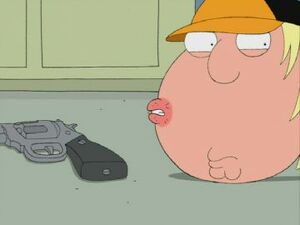 Doug was a pimple that lived on Chris' cheek in "Brian the Bachelor". He was a bad influence on him and got him in much trouble. Chris went to a doctor who attempted to use a cortisone shot on Doug but Doug pulled a gun and fired at the doctor, running him off. Chris and Doug wrestled for control with Chris finally reaching the shot and removing Doug. He is voiced by Kevin Michael Richardson.

Retrieved from "https://familyguy.fandom.com/wiki/Doug_the_Pimple?oldid=220363"
Community content is available under CC-BY-SA unless otherwise noted.