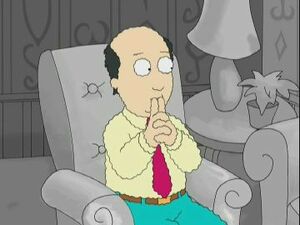 Dr. Katz is the main character of the animated series Dr. Katz, Professional Therapist is an animated series. The series originally ran on Comedy Central from May 28, 1995 to December 24, 1999, starring Jonathan Katz, H. Jon Benjamin, and Laura Silverman.

Katz appears as Peter Griffin's therapist in "Saving Private Brian", where Peter makes note of his unusual art style. He says that his skin always appears to be moving and he responds that he thinks he's having some sort of seizure. The episode's commentary reveals that Jonathan Katz declined the opportunity to reprise the role, and consequently Katz is voiced by Seth MacFarlane.

Retrieved from "https://familyguy.fandom.com/wiki/Dr._Katz?oldid=118138"
Community content is available under CC-BY-SA unless otherwise noted.